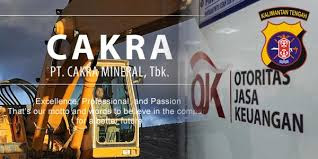 "I've met formally with FSA officials that they were investigating all matters related to false disclosure directed by Boelio Muliadi, President CKRA," said Jefferson Dau in Jakarta on Friday (9/1), the lawyer who complained to the FSA.
FSA investigators not only seek out violations of the rules and regulations of the stock exchange where CKRA became a public company, but will also denounce criminal violations to law enforcement agencies.
"FSA are well aware, the practice CKRA is disastrous for the future of the stock exchange in the country, then the offense should not be allowed, should be investigated thoroughly," said Jefferson, lawyer Takaras PT Inti Lestari and PT Murui Jaya Perdana.
Jefferson CKRA complained to the FSA and the Indonesia Stock Exchange (BEI), because CKRA has announced Takaras and Murui as a subsidiary with the controlled 55 percent of the shares, but until now the acquisition of shares has not been paid at all.
CKRA do with accommodating illegal mining of raw materials zirconium (Zr) unofficially, not mine officially from a location that has a license and clear and clean (C & C). "So CKRA exporting Zr actual results add illegal," said Jefferson.
In particular, the FSA will examine Boelio Muliadi (President CKRA), Argo Trinandityo (Director), Dexter Sjarif Putra  (Director) and Harun Abidin (which is a shareholder loan) CKRA which collateralize stock CKRA to borrow money from Cedrus Investments Ltd. (the Company Cayman ) but has yet to restore lending to Cedrus.
According to Jefferson, they have colluded to push Murui and Takaras into signing a share purchase agreement with the false statements, but failed to fulfill the obligations specified in the agreement.
One international investors, the Cedrus Investments Ltd., which has a large number of stocks CKRA, reported experiencing significant losses due to false information, misleading and inaccurate given by CKRA in the annual report to the public.
For more than two years, directors have CKRA with falsely claiming that CKRA has a 55% stake in Murui since August 2014, but it CKRA was never registered as a shareholder Murui. (uj)