OJK Claimed that Have Not Received the Report Against CKRA 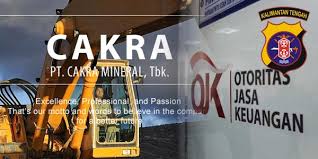 JAKARTA – Head of the Department of Consumer Protection Financial Services Authority (OJK), Anto Prabowo, revealed that they had not received a report related to alleged manipulation of accounting embezzlement and disclosure of data by the board of Directors of PT Cakra Mineral (CKRA) Tbk which has damaged some investors.
“What report? We have not received yet (PT CKRA case),” he told the reporter on the phone, Jakarta,Thursday (22/12/16).
When asked if the report has been received (by OJK), Anto said, not sure how long the process to follow-up.
“Usually like what? What is the follow-up? The report is also has not been received by our department,” he said.
Therefore, according to Anto, they cannot provide further information related to the questioned report.
“So I cannot comment related on this,” he said briefly.
As known, the two companies was announced has been acquired by CKRA by controlling 55% shares, nemely PT Takaras Inti Lestari and PT Murui Jaya Perdana, protested because until today the takeover of shares has not been paid.
Attorney of Murui and Takas, Jefferson Dau confirmed, they had reported CKRA to OJK and IDX. In the report, the Board of Directors of CKRA has colluded by push them to signed the stock purchase agreement with the false statements, but did not fulfill the agreement.
According to Jefferson, there are international investor who owned a large number of CKRA shares, reported experiencing significant losses as the result of false and misleading and innacurate information in CKRA annual report to public.
“For more than two years the Board of Directors of CKRA has claimed that CKRA has a 55% shares in PT Murui since August 2014 but CKRA was never registered as a shareholder in Murui,”said Jefferson.
This is what they reported to OJK and Indonesia Stock Exchange (IDX). One of the CKRA investors, Cedrus Investments Ltd (Cayman Island Company), also reported CKRA to OJK and IDX.
Share :
Related Article