Cedrus Optimistic to get the Right Loan Collateral Harun Abidin 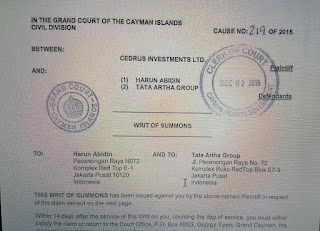 “We trust Police Chief Gen. Tito Karnavian in enforcing the law, and then our blocked collateral will be released,” Cedrus’ lawyer Iim Abdul Halim said on Tuesday in Jakarta.
Harun Abidin borrowed money to Cedrus in a proper way, with a number of shares in some public companies being its collateral. But instead of paying the money, Harun, as a debtor, sued Cedrus as the lender.
“We’ve sent a letter to the police chief that the block of the collateral has no legal basis. We’ve been fighting for our rights for 10 months,” said the lawyer from Sholeh Adnan and Associates legal firm.
Iim said that, as a foreign investor, Cedris had the rights to be treated better and got protection upon his assests in Indonesia. The businesmens who create mess should not be free from legal process.
“According to the evidence, Harun owed money to Cedrus, and he has yet to fill his promissory note. The police should take firm actions,” he added.
Cedrus had filed a report against Harun at the Cayman Island Court. In line with the agreement between Cedrus and Harun, it’s the Cayman Island’s law that will be applied.
Since Harun reported Cedrus to the police, Cedrus reported Harun to the police criminal directorate for allegedly avoiding debts.
Iim said that if there was any criminal indication, that the police should find the evidence. He added that it was not wise if Harun spread  information which has no prove.
“The information without evidence is a lie. It’s not good to spread a lie,” Iim said. (dj)
Share :
Related Article